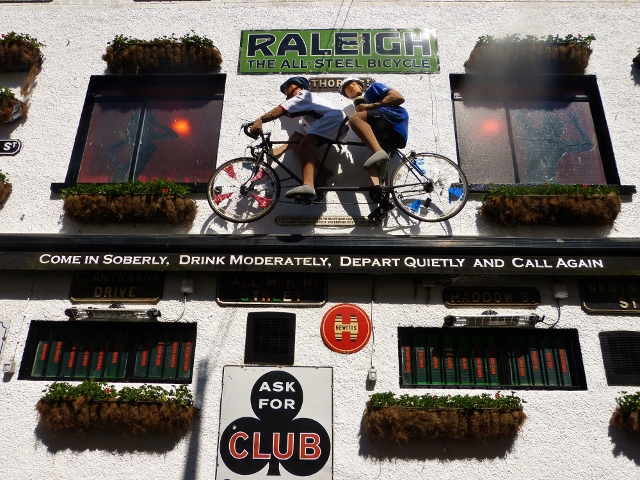 When in Belfast, experiencing the Irish pub culture is a must. There are pubs and bars aplenty where you can immerse yourself in and enjoy the best grog and grub that Northern Ireland has to offer. Here’s but three of the top watering holes in the city: 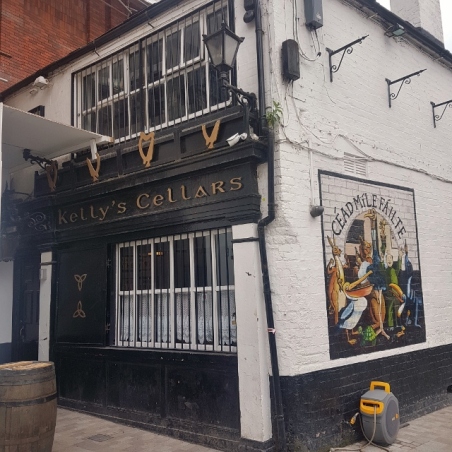 I managed to find Kelly’s Cellars on my first day at Belfast as my city tour driver announced at the tour’s end that the pub – “which has the best Guinness in town” – was just round the corner behind Primark department store in the city centre. Truth be told, the pub was high on my must-visit list ‘cos major cast members of Game of Thrones the likes of Emilia Clarke and Kit Harington were once pictured in it having after-filming drinks. Well, even without famous faces, the pub–built in 1720 and one of the oldest in the city–was a lovely place with cosy interiors filled with fascinating bric-a-brac. The heartfelt Irish greeting, “Cead Mile Failte”–which means a “hundred thousand welcomes”–can be seen both inside and outside the premises. 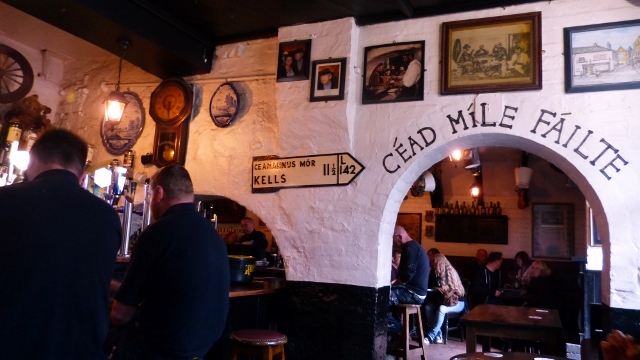 Though it was early evening, the pub was already quite packed but I managed to find a nice corner spot on a high stool at the bar. A cheery waitress took my order and told me that it will take a few minutes for the Guinness pint to settle before she serves it to me. She then took the time to tell me that my £2 coins were outdated (bummer!) and patiently helped me check if my other coins were still legal tender! 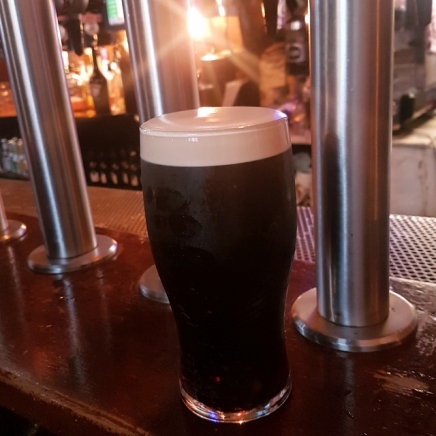 A drinking mate told me that the Guinness in Ireland is much better than the ones they served back here in Singapore and she was not wrong! Served well-chilled with a thick foam head, the pint was rich and creamy without much bitterness, and easily the best Guinness I’ve ever tasted. Just wished there was Irish stew to go with it but that was already sold out by 6pm. Still, it was nice to just enjoy a pint at the lovely bar before finding a small table where I could rest my back against the wall and people-watch. When my stomach started growling, I simply popped into the fish ‘n’ chips eatery two doors down… 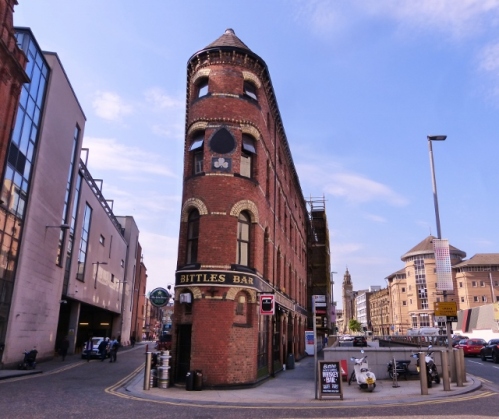 The “flat” bar that is Bittles Bar [Photo by Marguerita Tan]

Before visiting a new city, I usually follow the local tourism agency either on Twitter or Instagram to see what other interesting places I should look out for. Thanks to @VisitBelfast on Twitter, I learnt about the unique Bittles Bar that is housed in a Flatiron-like building which is, like, totally cool as I love the Flatiron Building in New York. 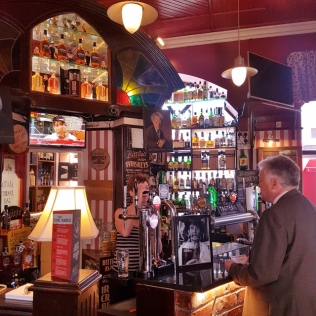 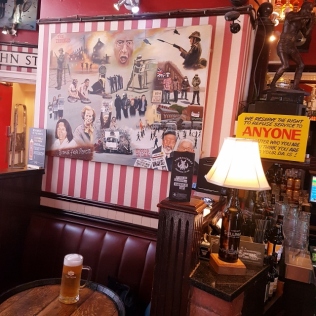 Located behind Victoria Square mall, the red-bricked bar was built in 1868 and once called the Shakespeare because of its theatrical clientele. Its interiors were just as quaint. Despite small and triangular in shape, it has much character thanks to rows and rows of well-lit beer and whiskey bottles adorning the walls behind the bar, and especially the colorful array of artwork adorning the rest of the room that celebrates Northern Ireland’s literary and sporting heroes, as well as politicians. 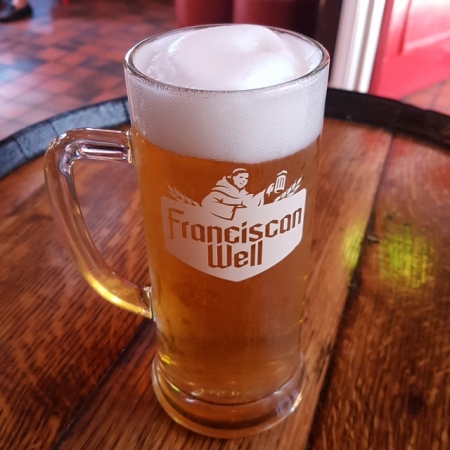 When in Belfast, drink a Belfast Lager! [Photo by Marguerita Tan]

Bittles Bar is also renowned for having one of the widest range of local and international beers in Belfast, as well as for its extensive whiskey collection. As it was a surprising hot and sunny day whilst I was there, I went for a Belfast Lager which was served by the manageress in a well-chilled Franciscan Well (Brewery) mug. The bright golden ale has a nice foam head with crisp flavors of hops and much carbonation. Though it had a slight bitter aftertaste, the beer was nonetheless smooth and refreshing, just great to savor in an aircon environment on a rare hot day in end May.

Duke of York at 7-11 Commercial Court 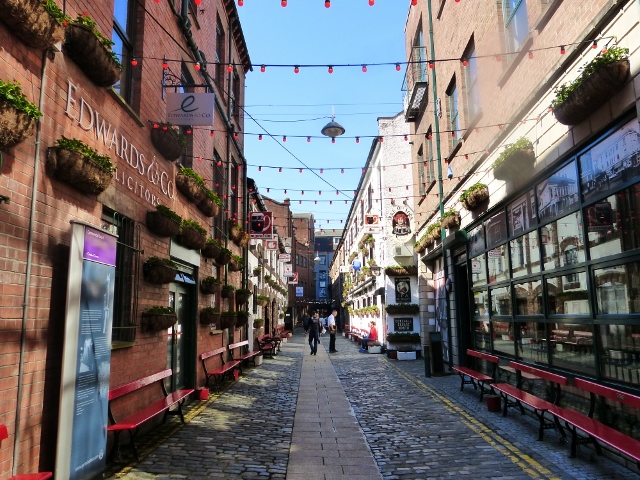 I came across this cool cobbled alleyway in the Cathedral Quarter while hunting for a mural of Jon Snow, the King in the North in Game of Thrones along North Street but which unfortunately I discovered too late that it has since been painted over (sob!) Still, this enchanting laneway was a nice place to discover with its eye-watching wall ornaments, street signage and red benches. The Duke of York, one of the most popular pubs in the city, is along this lane and it’s a huge long bar bedecked with loads of old-time memorabilia both inside and outside its premises. Word has it the bar is truly happening on most nights.

All photos by Marguerita Tan. No text or images from this post are to be used without the blog author’s permission. 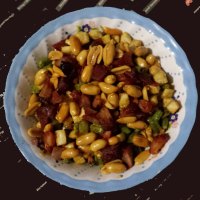 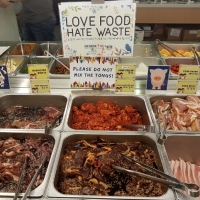 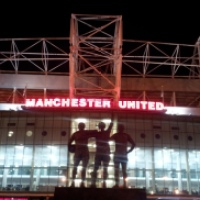 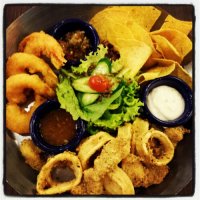 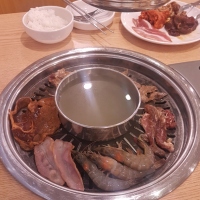 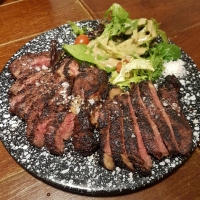